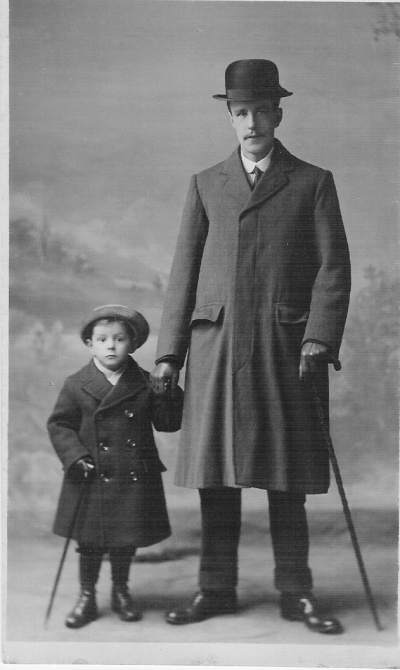 Edwin Francis and his son Ted

Edwin Francis was born on the 4th of February, 1879 in Ipsden, Oxfordshire. His father was John Francis, a blacksmith, and his mother was Hannah Hyde. The 1901 census states he was born in Stoke Row, Oxfordshire (which is the ecclesiastical parish in which the civil parish of Ipsden lay). He was probably named after his uncle Edwin Hyde.

At the age of two he was to be found living at 1 Newland Lane, Ipsden, Oxford, with his parents, and his elder siblings John, Sarah, and William. His father was a blacksmith employing 2 men. (All according to the 1881 census)

His widowed grandfather William lived in nearby Nuffield at the Gangsdown Hill and Grocery Shop. His grandfather was also a blacksmith and iron founder, but employed a larger total of 7 men. Living with William was three of Edwin's uncles and aunts, including one also called Edwin.

By 1901, Edwin was 22 and had become a butcher living on his own means. He was still single and was the last of his siblings to be living with his parents (his father was still a blacksmith). The address was now The Grove, Stoke Row (the number of the house was not given). His two brothers, and sister had moved to Reading where they were butchers in Watlington Street (although it appears from the census listing that they regarded their father as head of the house). They were living next to the Butcher family (ironically greengrocers) which gave Edwin an opportunity to meet his future wife. 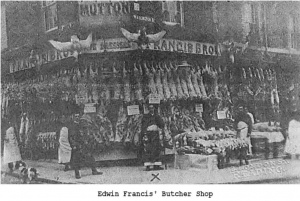 In 1939 he was living only with his wife Emily at "Butcher's Shop", Headley Road, Wokingham. In the house were:

Five years later Edwin married Emily Butcher (a surprisingly coincidence for a maiden name!) on the 17th of September 1906.

They had three children, Edwin (Ted), Jack, and a daughter who died.

In 1911 he is living in the shop at 65 Watlington Street with Emily and his son Edwin (Ted), and is listed as a butcher.

Kelly's Directory of Reading for 1914 lists for Watlington Street (124 Kings' rd. to London rd. East side.):

In the alphabetic section: