Ernest Frank Allfrey (Junior) was born on the 31st January 1894 in the St Paul's district of Brighton, East Sussex, and died in 1971. 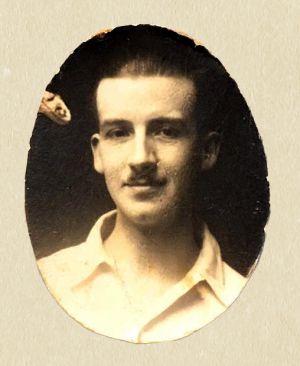 His parents were Ernest Frank Allfrey and Mary Minnie Wells.

His father died when he was seven, and in 1901 he is living with his newly widowed mother at 29 Sussex Street, Brighton along with his 1 year old brother Cecil.

His mother later married Ernest Edward "Teddy" Bradford. By 1911 he was still living with them in 17 Trinity Street in Brighton. He was 17, and listed as working as a cost keeping clerk for a general manufacturer.

Tim: "Ernest Frank went into the army in about 1915, as a volunteer. He joined the Sussex Yeomanry, but they gave up their horses and replaced them with bicycles. Ernest Frank loved horses so left and joined the Royal Artillery and was trained to ride by them. Their badge was a cannon on a plinth. He was commissioned as a 2nd Lieutenant on 30th April 1917.

He was invalided out of the army with TB. He was thought to have recovered but had a relapse. He went to a sanatorium in Matlock and this is where the picture of Beryl in the pram was taken.

Ernest Frank received an army pension. He went to Goathland where it was thought the good air on the moors would suit him. In the late 1920s, shortly after Tim’s birth, he returned to Sussex to take a job. He probably could have stayed at Goathland for good if he had wanted to."

From the army records his pension began in February 1918, at which point he was awarded a silver badge indicating that he had a disability, although what is not specified.

He married Violet Emily Ada Richardson on the 13th January 1917 at St John's Church in Brighton. At the time he was living at 17 Trinity Street, Brighton, and was listed as being a soldier. The witnesses were her father, Frank Engleheart Richardson, and a Dorothy Wieland Stevens. His father, Ernest Frank Allfrey was listed as deceased (having died at the age of 27, when Ernest jnr. was only 7).

Marriage Certificate for Ernest and Violet

In 1918 he was registered to vote at 17 Trinity Street, Brighton. Registered at the same house was his brother Victor Arthur Allfrey (who had already been killed in the war by this time).

In 1920 he was still registered to vote at 17 Trinity Street, Brighton,but now registered at the same house were Minnie Bradford (his mother), Ernest Edward Bradford (his step-father), and Cecil Nash Allfrey.

They had two children:

Ernest was the Scoutmaster for the Hassocks Troop from 1921 onwards when it was reformed after the war.

On 18th August 1921 the West Sussex Gazette reported for Hassocks:

The Mid Sussex Times on the 20th September 1921 reported on the Hassocks and Ditchling Hospital Carnival:

The 1930 Kelly's directory for Burgess Hill, Sussex, lists his brother Frank Edwd. Allfrey as being a Greengrocer at 5 Western Road. 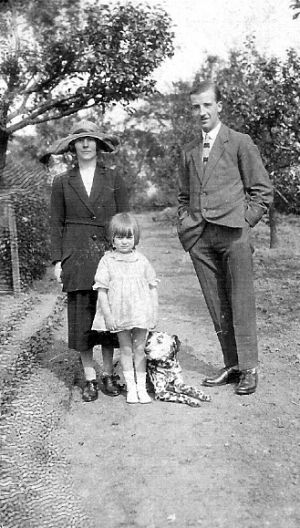 As the article above regarding the Boy Scouts stated, in 1922 Ernest went to stay in Matlock for a while, to convalesce from some unstated illness or injury. It is believed he was infected with tuberculosis.

In June 1928 the family had moved to Goathland in Yorkshire, with his daughter Beryl attending a school called Hilderthorpe College, Whitby (according to a certificate for drawing). Based on further certificates they were still there until June 1930.

The house in Goathland was one of a group of nine that had been built by Annabel Dott (a self taught architect/builder) originally as holiday let cottages, but then she wanted to do something to support servicemen disabled in the war. So she donated the nine cottages of The Orchard to be a "cottage colony" for disabled officers. She hoped the servicemen would take up a country occupation, and of many she suggested she hoped that weaving might become a village industry, even enlisting the Professor of Textile Industries from Leeds University. By March 1919 eight officers with their wives and families were in the process of moving in. One was lame, one was blind, and one was badly shellshocked. In the summer of 1931 the trust that handled the cottages decided that Goathland was too quiet for most servicemen and sold them to buy houses in London instead. By this time Ernest was no longer living in the houses, number 6 being occupied by a Mrs. Burt.

In 1931 they lived at Darnholme, London Road, Burgess Hill. Interestingly there is a Darnholme in Goathland, perhaps they named their new house after a place they knew. A photograph of Ernest shows him still being a Recorder in the East Sussex Milk Recording Society around this time (1930-1931).

Tim (Frank Allfrey) remembered that Tiny (Thora Bradford). and Mr. George E. Lacey were married at Burgess Hill in 1932. He, Beryl and family were living at London Road, Burgess Hill at the time. He said he was very young but can remember the wedding.

In 1933 they were living at 2 Wickham Villas, Hurstwickham, Hassocks. They were still there in 1935.

On the 18th December 1934 an article in the Mid Sussex Times stated that he appeared as a witness (along with his brother Cecil Nash Allfrey) to support his father-in-law E.E.Bradford, who was being sued by his former landlord for the state of a rented property (102 Junction Road, Burgess Hill) that he had vacated. Their testimony didn't help as they were considered non-impartial witnesses, and he had to pay for repairs.

Tim said: "Hurstpierpoint - They lived near Pesterfields Farm and obtained eggs from there. Dad loved going round the farm and mucking about in the hay, the smell of which he loved. There were still carts, pitchforks and horses, though some elevator ladders. There were 1930s vehicles though not many vehicles around. Only a barn is left now [or was when we spoke] which has been converted into a house. Ernest Frank kept his car in the barn, and used to drain the radiator every night and fill it up again the next day. There was no anti-freeze available in those days, at least to the ‘man in the street’"

On the 19th February 1935 an article in the Mid Sussex Times announced the resignation of the secretary of the Hurst Root Show, a Mr O. S. Allston.

On the 20th March 1936 the Sussex Agricultural Express listed Mr E.F. Allfrey as the honourable Secretary for the "Hurstpierpoint Root and Corn Show and Ploughing Match". He was re-elected to this post. On Friday 2nd October 1936 the Annual Dinner was held at the Chinese Gardens, Hurstpierpoint in the evening, and Mr E. F. Allfrey was in attendance. In October 1937 again for the "Hurst Ploughing Match" it was stated "The organisation was carried out by Mr. E.F. Allfrey (hon secretary).". On the 18th October 1938 the Mid Sussex Times report on the show stated "in his quiet and courteous manner, Mr. E. F. Allfrey again laid claim to being the perfect Hon. Secretary. Nothing is ever too much trouble for him." On the 19th September 1939 he announced in the Mid Sussex Times about the Hurstpierpoint & District Agricultural Association that "The Chairman instructs me to announce that on account of the prevailing conditions the Annual Show is cancelled". I assume that this was because of the start of the war.

Memories from Tim Allfrey: "Ernest Frank and Violet went to some ARP classes. The sirens went off immediately the war started but it was nothing. When asked whether his parents were supporters of the Chamberlain government or Churchill, Tim felt there was a general feeling that the situation was worsening and a doubt as to whether Chamberlain was a strong enough character for the job. Churchill, despite Dardanelles mistakes, was regarded as something of a national hero. The 1939-40 winter was very cold. Then sirens went off - the real thing. There were day light dog-fights and planes droning to London. The family had a Morrison Shelter by the French windows at Applesham. Dad was a Civil Defence messenger.

People were given mortar and bricks to build a blast wall outside their door, and Ernest Frank built one but the mortar they were provided with was useless. They were later given cement.

In June 1940, Tim had a close scrape when low flying planes machine-gunned overhead in Applesham Way. He hid in a derelict house at the bottom of the road. Ernest Frank apparently hid under the kitchen sink."

A few years after the war started, in 1942, Violet dies when they were living at 37 Applesham Way, Portslade, Brighton and Hove.

This newspaper report had one fact wrong, she actually went missing in May.

After her mother's death, Beryl was parted from her father and brother through no fault of her own.

Tim: "After his remarriage Ernest Frank was involved in the Civil Defence." 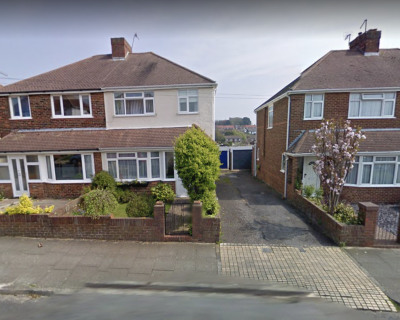 To the left is Ernest dressed up in his uniform (on the same chair that his wife was photographed on), and below later on in his life with some of his (allegedly up to 7!) Scottish terriers (note the matching wallpaper and sofa). Source JPA.

The Worthing Gazette says that a Constable Allfrey "Resumes Police Duties following discharge from army through injury" on the 29th May 1918. No initials or first name given. However on the 20th November 1918 other news reports from the Worthing Gazette refers to a Constable L.F. Allfrey getting an award for stopping a runaway van horse. This is likely to be Ernest's brother Leslie Frederick Allfrey.

In an advert for the "Hurstpierpoint Root and Corn Show and Ploughing Match" one of the people from whom tickets can be obtained for the dinner is "Mr. E.F. Allfrey, 2 Wickham Villas, Hurst Wickham, Hassocks".