Frank Engleheart Richardson was born 23 Nov 1872 in Blackheath in Kent.

His parents were Ernest Murray Richardson and Augustine Richardson, and in 1881 he is 8 years old and living with them at 8 Buenos Ayres, Margate, Kent along with three brothers Charles, Ronald and John, and his sisters Mabel and Violet.

In 1891 he was living with his widowed mother in Andrew Villa, in the Keymer (eastern) half of Burgess Hill. Probably on London Road.

At the age of 20 whilst working as a carpenter he married Catherine Edith Randall in the parish church in Brighton on the 13th May 1893. His residence at the time was 15 Polham Square, and his father's name was given as Ernest Murray Richardson, Gentleman, Deceased. The witnesses were Edward Evans and Alice Charles.

By 1901 he is living with his wife Catherine and their three children at 62 Islingwold Road, Brighton.

In 1911 he is living with his family at 88 Albion Hill, Brighton, he is a joiner working for a motor car company.

They subsequently had seven children, Mabel, Frank, Violet, Charles, James, Ronald, and Raymond. Five of these are photographed at Catherine's funeral.

His son Frank married Violet Gertrude Strong (a.k.a. Auntie Gert), they are pictured with their nephew Frank Victor Allfrey. It's quite a coincidence (and quite confusing!) that Frank (junior) married a girl with the same name as his sister, but then both the Allfrey's and the Richardson's had more than their fair share of Frank's and Ernest's as well.

In 1911 their daughter Mabel is 17 and staying with her grandparents James Randall and Harriett Randall at the Sir George Thomas's Inn, Slindon, Sussex.

The 1939 register lists Frank as living at 4 Windmill Street, Brighton, Sussex. The members of the household are:

Memories of Frank from Tim Allfrey

His grandson Tim (Frank Allfrey) said that he smoked ‘Digger Shag’ tobacco in his pipe, and smelled of this. His wife, Edith, smelled of (probably) lavender and always wore an apron. Frank had a hanging wart the size of a pea on his nose. He suffered from prostate problems. Frank and Edith called Tim ‘boy.’

Tim and his family went to his grandparents on Sunday afternoons for tea and supper. They played ‘Napp’, a card game, in the evening. Card games at this time were illegal. They therefore closed the curtains and gambled for cardboard milk discs, which Ernest Frank Allfrey (Beryl and Tim’s father) had brought from work.

Afterwards they had a beef joint (‘which you couldn’t afford now’) for a cold supper. Supper was always at 9pm. Frank Engleheart went to pub on the corner for a jug of stout and people had a glass of stout with beef. Tim said the dripping was lovely and they had it with salt. They went home and Tim hated the idea of going to school the next day. Beryl went to their grandparents also on Sundays but tended to leave in the evenings to see a film.

Frank Engleheart Richardson died on the Fifteenth of August 1944 at 33 Clyde Road, Brighton.

He was 71 years old, and a Motor Coach Finisher (Motor Coach Builders).

He died of a cerebral haemorrage.

The death was registered on the 16th August 1944 by F.E. Richardson (son), present at the death. Resident at 21 Mile Oak Garden, Portslade-by-Sea. 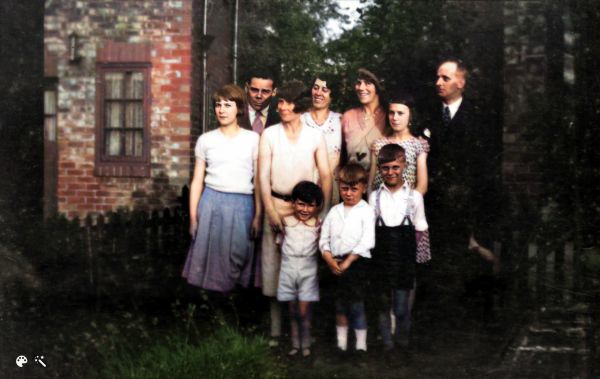 It is known to the family that Mabel (Auntie May) Richardson married a Joseph Murray. She was an opera singer, with the Fol-de-Rols and with the Carl Rosa Opera company.

Online trees state that her first husband's name was Roy McVitty Duffield, who died in 1965, which would indicate that she was divorced, not widowed.

From the 1939 register, Mabel K.A. Murray was born on the 19th August 1893, she is living at 39 Benton Road, Newcastle-upon-Tyne, and she is living with Joseph H. Murray (born 3rd April 1881) who is a wholesale fruit and potato merchant's clerk. There is one redacted entry (someone still living).

Another Mabel (Edith) Richardson was registered in Q4 1895, Brighton vol.2b p.256, but that doesn't seem to be the right one.

Edith is still living at 39 Benton Road in 1980 (according to the phone-book).

I was confused by a William Brian Richardson (Registered Q3 1929, Brighton, Vol. 2b p.343) who's mother's maiden name was Randall. I thought this must also be Catherine's son (albeit a lot later). However the birth certificate lists the father as Ernest Victor Richardson, and the mother as Dorothy Mary Richardson (late Foot, formerly Randall). Born 12th June 1929 at 78, Buckingham Road, Brighton. His father lived at Rosedene, Crescent Drive, Woodingdean, Brighton.