Beryl Carrington was born Beryl Violet Nash Allfrey on the 25th August 1918, in or near Brighton, Sussex. At the time her parents were living at 17 Trinity Street at the time. On her birth certificate her father's occupation is 2nd Lieutenant Royal Field Artillery.

Her parents were Ernest Frank Allfrey and Violet Richardson. 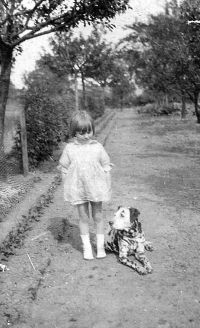 By 1923 her father was convalescing in Matlock, Derbyshire, with his family with him.

By June 1928 they were at 6, The Orchards, Goathland. The Orchards were a small group of cottages that had been donated to a trust for Officers injured in the First World War. While there she went to a school called Hilderthorpe College, Whitby according to a certificate for drawing. She was 9 years old. In 1929 she had two more certificates for drawing from the same school. In June 1930 she had another drawing certificate from Hilderthorpe, and then sometime after that they went back to Burgess Hill, at Baronscourt School, aged 11 years.

In Yorkshire she had a friend called Connie who lived in a village called Sleights. Her friend Kitty gave him a book on moths.

In 1931 they lived at Darnholme, London Road, Burgess Hill. Interestingly there is a Darnholme in Goathland, perhaps they named their new house after a place they knew.

On the 12th July 1932, the Mid-Sussex times reported that she ran the fortune-telling stall at the Baronscourt school at Burgess Hill. Probably she was at school then.

On the 29th October 1932, she was a bridesmaid at the wedding of her grandmother's daughter Thora Bradford (see Mary Wells for the news report).

In 1933 they were living at 2 Wickham Villas, Hurstwickham Hassocks.

In 1934 they were still living there, at 1st January 1934 Beryl started work at Gospels when she was 16. An art centre where she did weaving and dying.

In 1935 they are still living at 2 Wickham Villas.

In 1939 she was living with her uncle and father at 21, Mile Oak Gardens, Portslade-by-Sea U.D., Sussex, England.

The Violet living with her is not her mother, it is her Auntie Gert. Her mother was recorded as being at the East Sussex County Mental Hospital at this time.

She married Geoff Carrington in 1940 and had three daughters Pauline, Hazel, and Sylvia. She met Geoff at a rambling club.

Her marriage certificate says they were married on the 14th September 1940, at St Nicolas Church, Portslade, Sussex. She was living in 37 Applesham Way, and Geoff was living at 127 (or 27) Havelock Road, Brighton. His father James Carrington was deceased. Her father was Ernest Frank Allfrey was a district clerk to urban district council. The witnesses were V. Allfrey and Kenneth Archer.

Note: Beryl sometimes signed her self Auntie Violet in order not to get confused with her nephew John Allfrey's mother's sister, also called Aunt Beryl.

They lived at 37 Applesham Way for a while when she got married. Geoff was in the forces. They then had rooms in Patcham but their wedding presents and furniture were in a room at Applesham.

On the 3rd January 1941 a letter was redirected from Brangwyn drive to 37 Applesham Way.

On the 6th March 1942 there is a letter from Geoff addressed Beryl to at 37 Applesham Way. At the same time as this, her mother Violet was in hospital having an operation.

It's unclear where Geoff was at this time. At the start of the war he was an ARP. Then he was a mechanic on planes. In 1944 he sent a letter from Fainwood?, Swansea, he says that he is being moved to Northumberland at RAF Milfield?, Annock?.

In 1943 she was living at 57 Baranscraig Avenue, Brighton, Sussex

Left the wooden monkeys carved by Ron Richardson to Hedley and Harvey.

Also had some China monkey bookends. Paul has these.

At some point her father went to Goathland in Yorkshire, he was something to do with testing milk. She went there to, there is a school report from there.