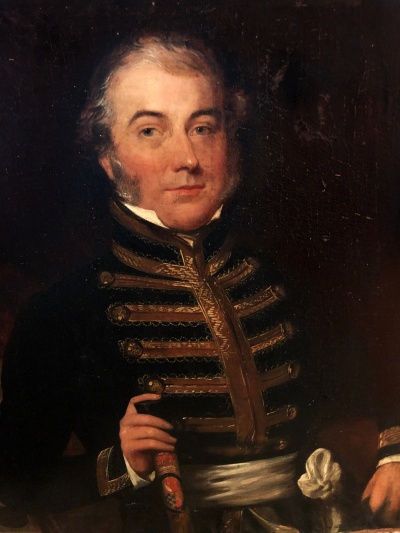 John Angus Walmisley was the youngest son of William Walmisley (1745-1819) who had been clerk of papers to the House of Lords. He retired to the market town of Bromley, Kent, where his daughter Mary had married a pharmacist named Baxter. His five sons were choristers at Westminster School, a prestigious institution within the precincts of the abbey.

John Angus Walmisley became a parliamentary clerk and was who was one of the Earl Marshal's Gold Staff Officers at the coronations of three Sovereigns, George IV. (1821), William IV. (1831), and Queen Victoria (1838).

In 1830 and 1831 he was living at Smith Square, St Margaret, Westminster (according to the rate book). Coincidentally (or not) a William George Lambert is also living in the same place (a few houses away) although where John has a house, William has a slaughterhouse. And John is living next to a Charles Wilkes Churchill.

By 1832 his house is counted as in North Street (although it is in exactly the same place in the list).

John Angus Walmisley was born on the 23rd November 1791 to William Walmisley and Mary Walmisley, daughter of Thomas Jackson of Bewdley.

On the 28th November 1805, when he was 14 years old he was apprenticed for 7 years to William Cummins, a Needle Maker of London. He was "made free by servitude this 16th day December 1812".

In the European Magazine and London Review, Volume 70:
Sept 6. Mr. John Angus Walmisley , son of Mr. Walmisley, clerk of the papers of the House of Lords, to Anna Maria, daughter of the late Lieutenant-colonel Lambert of the East India Company's service.

Evening Mail 23 October 1816 At Margate, on the 6th of last month, Mr. John Angus Walmisley, son of William Walmisley, Esq. clerk of the papers of the House of Lords, to Anna Maria, only daughter of the late Lieutenant-Colonel Lambert, of the East India Company's service. 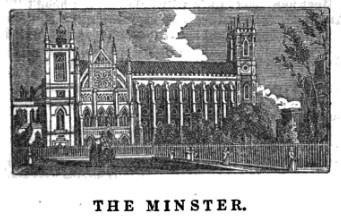 The Gentleman's Magazine and Historical Chronicle from January to June 1829:

p363. Westminster Abbey on fire. April 27. This evening, about 11 o'clock, the north transept of Westminster Abbey was observed to be on fire. Mr J. Walmisley, of Smith's-square, who, with a friend, was passing at the time, immediately rang the alarm bell, and sent for some of the officers belonging to the Abbey. The writer of this instantly procured the keys of the N.W. turret staircase, which communicated to the part of on fire, and was followed by Mr. Walmisley, Mr Wm. Rose, son of Sir G.Rose, and one or two others, to whose active exertions, at the imminent hazard of their lives, are due the praise of arresting the progress of the fire. It took place in the upper story of the east side of the north transept; and several painted screens, forming part of the old scenery of the college theatre, and the flooring were on fire. The gentlemen before-named tore these down, and by a plentyful supply of water succeeded in preventing the flames communicating to the roof, which is here of wood. The cause of the fire is uncertain, but there is every reason to believe that it was wilful; since we understand from Mr. Carter, the clerk of the works, that no workman had been in the gallery for some time. An examination of the church has led to the discovery of the egress of the incendiary by a door in the south-west turret of Henry VIIth's chapel. The investigation is proceeding at Queen-square police office.

p460. The Dean and Chapter of Westminster Abbey have offered rewards of 50 l. for the commital, and 150 l. for the conviction, of the incendiaries who attempted its destruction (see p.363). Footmarks have been discovered near one of the water-spouts, and there appears to be little doubt that it was by climbing the water-spout that an entrance was effected. The prebendaries have deemed it necessary, to prevent in future any attempt to destroy it, to employ a watchman in the interior of the Abbey.

They had the following children, christened at St Margaret's Westminster:

In 1832,1833 and 1834 John Argus Walmisley was registered to vote in the parish of St. Sepulchre, he was living at 12, North Street, Westminster, and his right to vote was through a freehold house at Cow Cross Street (similarly for a Robert Walmisley of 21, Abingdon Street, Westminster).

In 1834 John Angus Walmisley was also listed in the electoral register at 4 Smith Square, Westminster in the section titled "Needle Makers".

In 1837 he submitted a claim for expenses after the fire that destroyed parliament:

The claim of John Angus Walmisley, late Extra Clerk in the Election Office, on account of Losses sustained by him at the Fire which consumed the Two Houses of Parliament, October 1834.

In 1839 John Angus Walmisley was listed in the register of electors for St John the Evangelist, due to having a house on North Street. He was also listed as an elector in St. Margaret, Westminster, living at North-Street, by nature of "Scot and Lot" (a tax usually mounted on guild members).

In 1841 both John Angus Walmisley (North Street) and Thomas Forbes Walmisley (Cowley Street) both voted for Rous instead of Evans and Leader.

In 1845-1848 he was on the electoral register due to a house as occupier, as an occupying tenant, at 7, Clapham rise, 40, Parliament street (Parliamentary Agent).

The 1845 Post Office directory for London and Birmingham listed the following related entries:

In 1850 he was listed on the electoral register for St John the Evangelist, Westminster, living at 6 Bessborough-gardens. There is a Thomas Forbes Walmisley at 18, Cowley-street, and a John Walmisley at 2, Dorset-place. For 1851 the same is true, apart from in addition a William Walmisley is living at 24, Grey-coat-street.

On the night of 30 March 1851 John was living at 170 Bessborough Gardens, Belgrave Road, Westminster. He was 57 and widowed. He was still a parliamentary agent.

In 1858 and 1859 he was again listed on the electoral register for St John the Evangelist, Westminster, living at 6 Bessborough-gardens. Thomas Forbes Walmisley is still at 18, Cowley-street, but there is a William John Walmisley is living at 5, Charlwood-street.

On the night of 7 April 1861 John was 69, still a parliamentary agent, and living with his son Charles MacKennon Walmisley and Isabella Amelia Walmisley

In the 1861 electoral register a John Augus Walmisley is listed at living at (and owning) 6, Bessborough-gardens.

John Angus Walmisley died on the 7th February 1862 at Old Brentford at the age of 70 years old.

His obituary appeared in:

John Angus Walmisley, Esq. - The death of this gentleman, who has long been well-known to the public in various important capacities, took place very suddenly on the 7th inst., at Brentford, whilst in the discharge of his duties as a Director of the Brentford Gas Company. The deceased had just attained the full age allotted to man, and until within the last few years had enjoyed uninterrupted health.

He was the youngest of the sons of William Walmisley, Esq., Clerk of the Papers of the House of Lords, the descendant of one of the ancient English territorial families whose estates were situated at Atherstone, in Warwickshire. Mr. John Angus Walmisley was formerly an officer of the House of Commons, and was the oldest Parliamentary agent.

To him was mainly to be attributed the preservation from fire, in 1829, of that venerable fabric Westminster Abbey, when its destruction was attempted by an incendiary, on which occasion Mr. Walmisley's life was endangered by his personal exertions. The Dean and Chapter of Westminster acknowledged his services by a letter of thanks.

Mr. Walmisley obtained high honours in Freemasonry, and with some few more favoured individuals had acted as an officer of the Earl Marshal of England at three Coronations, including that of our present beloved Queen.

The burial index says that he died at Besborough Gardens, Pimlico and was buried on the 13th of February 1862 at West Norwood Cemetery, London, Surrey.

In the 1839 Robson's London and Birmingham directory:

Dorking and Leatherhead Advertiser 27 March 1915 Major Walter Milbanke Walmisley, of the City of London Artillery Brigade (5th London Division, R.A.), died on Monday at Glendalough, Wallington, in his 84th year. Major Walmisley, who held the Volunteer Decoration, was the son of the late Mr/ John Angus Walmisley, who was one of the Earl Marshal's Gold Staff Officers at the coronations of three Sovereigns, George IV., William IV., and Queen Victoria.

Application of Philip Moss Walmisley to the Bengal Infantry

On the 7th December 1842 his son Philip Moss Walmisley was accepted into the Bengal Infantry of the East India Company. He gave a recommendation for his son, and witnessed the signing of the form.

In the entrance form Philip listed his education as Westminster School, Stutton Hall Carlaverock near Dumfries, and King's College. It was Classical and Mathematical.

He lists his father as J.A.Walmisley Esq, of 7 Clapham Rise and 40 Parliament Street.

Chapter 8. The Parliamentary Office in the Early Nineteenth and Twentieth Centuries: Biographical Notes on Clerks in the House of Lords 1800 to 1939.

Clerk of the Journals

In 29 Oct 1828 a Shaftesbury Edward Walmisley (b. 3 June 1828) was christened at St Margaret's, Westminster but the parents were Edward George Walmisley (Esquire) and Mary Selina Sybella Walmisley, Abingdon Street. This turns out to be John Angus' elder brother.

Who is this ME Lambert?

Edward George Walmisley's father (according to his grant of a coat of arms) was William Walmisley of the parish of St. John's in the city of Westminster.