The obituary of his son John Angus Walmisley said: "He was the youngest of the sons of William Walmisley, Esq., Clerk of the Papers of the House of Lords, the descendant of one of the ancient English territorial families whose estates were situated at Atherstone, in Warwickshire."

I'm currently uncertain who his first wife was, but whoever she was, she died before 1778.

William Walmisley of the parish of Esher, Surrey, married Sarah Jennings, of this parish, a minor, by license from the Archbishop of Canterbury (by and with the consent of William Winter the guardian of the said minor) on the 20th November 1773 at St James, Piccadilly, Westminster.

Both signed the register, and William's signature is similar, but not identical to the signature on his later marriage to Mary Jackson. The differences might be due to different pens or different size of area to write in. But some letters are different nonetheless. Looking at the parish registers for Esher, Surrey, no Walmisley's were born in Esher in 1745 (or +-5 years), so whoever this Walmisley was, he must have only been staying there, not born there.

The witnesses were Richard Chinery and Caroline Chinery. 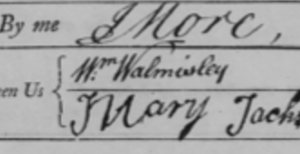 A Sarah Walmsley was buried at Southwark, St John, Horsleydown on the 14 Nov 1776 (now Bermondsey, Southwark - 3 miles across the river from St Margaret's)

An Elizabeth Walmisley was buried at St Margaret, Westminster in 1776. All gravestones were removed from St Margaret's in 1881.

William married Mary Jackson on the 15th March 1778 by banns at St Margaret's, Westminster. He was a widower, and she was a spinster. Both signed the register, in the presence of George Hall and James Fox.

William and Mary had five sons and two daughters:

William retired to the small market town of Bromley in Kent, ten miles from London, where his daughter Mary had married a pharmacist named Baxter.

William Walmisley died on the 17th January 1819 at Bromley, Kent.

He is buried in the St Peter and St Paul Churchyard, Church Road, Bromley, London.

On Sunday last, at his house, Bromley, Kent, in the 74th year of his age, William Walmisley, Esq., nearly 20 years clerk of the papers of the House of Lords, after a painful and protracted illness, which he bore with that piety and resignation which always distinguished this good man during the whole of his life.

Obituary of his son, also called William Walmisley, the Times, April 19, 1822: On Tuesday last, aged 42, Mr. Wm. Walmisley, for 26 years a clerk in the Parliament office, leaving a widow and four young children.

Chapter 8. The Parliamentary Office in the Early Nineteenth and Twentieth Centuries: Biographical Notes on Clerks in the House of Lords 1800 to 1939.

Walmisley, Thomas Forbes (1783-1866), glee composer and organist, third son of William Walmisley, clerk of the papers to the House of Lords, was born in Union (now St. Margaret's) Street, Westminster, 22 May 1783. He, like all his brothers, was a chorister in Westminster Abbey, and he was a scholar at Westminster School from 1793 to 1798. He studied music under the Hon. John Spencer and Thomas Attwood [q.v.], the pupil of Mozart, and was assisstant organist to the Female Orphan Asylum from 1810 to 1814. ...

One William Walmesly was christened on the 7th April 1745 in Bermonsey, the son of John (a mason) and Sarah Walmesly. However, this might not be the right Walmesley as on the 20th May 1745 a William Walmesley (child) was buried at the same church. Plus our William was known to have descended from Warwickshire, not Bermonsey.

Also a stillborn child of one William Walmisley living at Wood Street, St John The Evangelist, Westminster, was buried on the 12th July 1819.