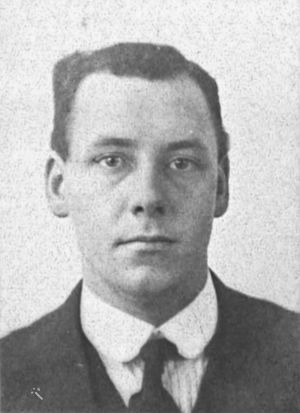 Robert Norman Watson was born on the 14th January 1891, in 20 Chichester Road, Westoe, South Shields, Durham. His parents were Charles John Watson and Mary Ann Stewart Dunn. His father was a butcher (manager).

His birth was registered on the 19th February 1891 in South Shields.

He was baptised on the 11th February 1891 at St Michael, South Westoe, Durham, England. His parents were given as Charles John Watson and Mary Ann Stewart Watson.

During the 1891 census Robert was just 2 months old, living with his parents at 20 Chichester Road, Westoe, Luygate, South Shields. His father was a butcher.

In 1901 he is living at 14 Belle Vue Crescent, South Shields along with his sister Florence, and brother Harley.

In 1911 he was still living with his parents at 10 Talbot Road, Tyne Dock, South Shields.

His father, a butcher, a pretty uncouth character by all accounts, said "Durham University? Boarding school was good enough for me... I'm not paying... etc", so Robert aged about 14-16 rushed off to Hawthorn-Leslie's (the ship builders of Newcastle-upon-Tyne) and apprenticed himself to them as an engineer. He was the youngest Chief Engineer ever then! This meant he was going all over the world to furrin parts. His mother and sisters were always glad to see him ("Then the girls shout hooray! Here comes brother with his three months pay!"). The younger boy, Harley, was his mother's favourite.

He became the engineer on the "RV George Bligh" of Lowestoft, registered in London, a Naval Research Vessel which studied fish and biology in the North Sea. The Bligh was on research duty, and at home for a week and at sea for the same - roughly. Sometimes the scientists from "the Lab" where the research was done went to sea in her. We actually met and got on with Miss D. Thursby-Pelham. She was from Cambridge - she was the first woman to go out with the fishing fleet and was quite distinguished. She had us to tea I remember. 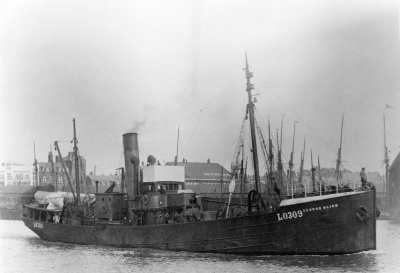 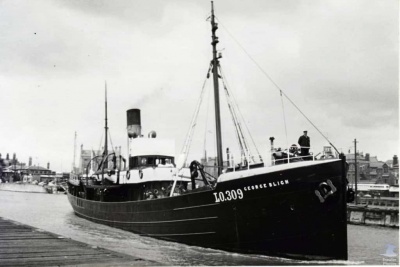 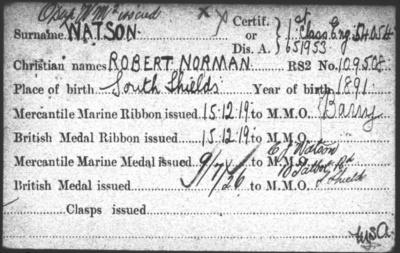 Between 1914 and 1918 there was some unpleasantness going on in Europe, called WWI. I presume that Robert became involved in this as a Merchant Seaman, as he has a medal card listing a Mercantile Marine Ribbon and a British Medal Ribbon being awarded on the 15th December 1919. And a Mercantile Marine Medal being awarded on the 9th July 1926. Both this medal card and his discharge card list him as a 1st Class Engineer, certificate number 54054, and discharge number 651953. His RS2 number was 109508.

Robert married Eugenie Gordon on the 23rd January 1922 at the Holy Trinity Church, in the parish of Barnes. Their fathers were given as Charles John Watson and Samuel Gordon.

A few weeks later, on the 3rd February 1922, he was listed on the outward passenger lists going to Calcutta.

Robert Watson was the engineer on a 3,872 ton British Merchant Navy steam freighter the S.S. Larpool (Whitby). She sailed with convoy ON-027, which left Loch Ewe on the 18th October 1841 heading across the North Atlantic to Canada. She had a crew of 43, and was carrying 3991 tons of general cargo. She was expected to go on to Barbados and Demerara.

The ship would have been unable to leave Leith due to engine difficulties, but Robert managed to get it working.

However, it would eventually become a straggler from the convoy, and at 05.26 hours on 2nd November, 1941, the Larpool was hit by a single torpedo from the German U-boat U-208 about 250 miles east-south-east of Cape Race (Canada) and was sunk at 07.17 hours with two further torpedoes. 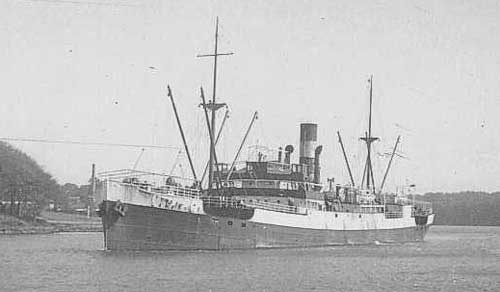 The master (Charles Patton) and five crew members landed at Burin, Newfoundland on 10 November. Eleven crew members were picked up by the Canadian corvette HMCS Bittersweet and landed at Halifax. Twenty-two crewmen were missing and four died of wounds. Their engineer Robert Watson was one of the missing. Of the killed 22 were crew and 4 were gunners.

This was to be the only ship the U-208 sank, as the U-208 was herself sunk (with all hands lost) five weeks later on 7 Dec, 1941, in the Atlantic west of Gibraltar, in position 35.51N, 07.45W, by depth charges from the British destroyers HMS Harvester and HMS Hesperus.

Robert Norman Watson is commemorated at the Tower Hill Memorial in London on panel 64. 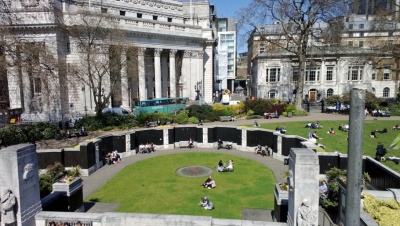 "To go back to the Larpool. The firemen, three watches of firemen two each and one trimmer. One of the first jobs a watch did when they came on was to clean one of the fires. Three fires to each boiler six fires. Each watch got two fires to clean. One man on each to clean it. The previous watch used to put a layer of fresh coal all over the fire. Then as soon as the new watch came on they turned half that coal on top of the other half. Then proceeded to rake the clinker. There was very little ash by then, it was just clinker, and they raked that out. All the clinker out. It used to come out and fall down at their feet very hot. White hot all the fumes and that right at their feet. When they had cleaned one half they put the coal both halves over at the other side and cleaned the other half. Then spread the coal about and started to stoke the fire up. It was one hell of a job especially in tropics. If you go down to the engine room you couldn't touch the handrails. You had to have a cloth otherwise you burnt your hands. On deck you could literally fry an egg. On the deck you could not walk bare foot on it at all; it was that scalding hot. They used to come up after cleaning a fire absolutely wringing drowned wet. But having got the fire cleaned. They used to then start and stoke up and then get the ashes up; clinkers up get it up and throw it over the side. The cleaning of the fire was a terrible job. There was one trimmer to both watches. He had to trim the coal forward so that the fireman could get it nice and easy. They used to burn 12-14 tons of coals a day, so you can see that that trimmer had a lot of coal to shift. Admitted it was night on his doorstep but some of it was along way away. One trimmer I particularly remember was called George Dale. We used to call him the "Bunker Beast" because he used to go on watch in the tropics, and all he had on was a belt. A horse belt, not an ordinary mans belt, and a pair of boots, and that was his dress. That was to keep his belly up. He weighed 18 stone when he joined us and he weighed 14 when he left. Mainly due to more sensible food and lack of beer and so on. One of the things they used to say about him was that him and his wife had a business going round the various markets in Whitby area selling pottery crockery. If there was not a sufficient crowd round his stall buying pots he used to juggle them and all of a sudden let then drop. That attracted a crowd of course. His business collapsed mainly because him and his wife drank too much"

FRANCIS, First Radio Officer, JOHN JAMES. (BOURNEMOUTH).S.S. Larpool (Whitby). Merchant Navy. Died Sunday 2 November 1941. Aged 27. Nephew of Elizabeth Francis of Boscombe, Hampshire. Panel 64. John’s 3872 ton steam freighter built in 1924 by William Pickersgill & Sons Ltd, Sunderland, County Durham and owned by Headlam & Sons, Whitby, Yorkshire was a straggler from the convoy ON-27, when she became the sole successful ‘kill’ by the u-boat U-208 commanded by Oberleutnant zur See (Lieutenant) Alfred Schlieper, S.S. Larpool was torpedoed at 0526 hours about 250 miles east south east of Cape Race,Newfoundland whilst traveling from London to Barbados and Demerara with 3991 tons of general cargo, 22 crew members and four DEMS gunners were lost in the sinking, butthe Master Charles Patton and five crew members landed at Burin, Newfoundland on 10 November, crew members were picked up by the Canadian Flower class corvette HMCS Bittersweet (182) (ex HMS Bittersweet) commanded by Lieutenant Commander J.A. Woods and landed at Halifax, Nova Scotia. Alfred Schlieper and his crew of 44 were all lost when the U-208 was sunk on Sunday 7 December 1941 in the Atlantic Ocean west of Gibraltar, in position 35.51N, 07.45W, by depth charges from the Royal Navy Havant class destroyers HMS Harvester (H19) andHMS Hesperus (H57), the latter was on of the ships which were commanded by Captain Donald MacIntyre DSO & 2 Bars, DSC during the Second World War, who following his retirement from the Royal Navy in 1954, became a much respected naval historian with several successful and important books to his credit. A type VIIC submarine the U-208 was built by F Krupp, Germaniawerft, AG in Kiel, Schleswig-Holstein, Germany, the U-208 was laid down on Monday 5 August 1940 and commissioned on Saturday 5 July 1941, being amongst 131 submarines of different types that were commissioned into the Kriegsmarine from their Kiel shipyard between the end of June 1935 and Saturday 14 April 1945.

Birth Registration Robert Norman Watson, registered in the March Quarter 1891 in the district of South Shields, Volume 10a, page 782

He was born on the 14th January 1891 in 20 Chichester Road, Westoe, South Shields, Durham. His parents were Charles John Watson and Mary Ann Stewart Watson (formerly Dunn). His father was a butcher (manager).