Samuel Gordon was the father of Eugenie Gordon, the censuses put his birth year around 1855-1856, and his birth place as variously St John Wapping, St Pancras, Wapping, and E.Middlesex. His marriage certificate to Janet states that his father was Joseph Gordon (labourer).

His father was Joseph Gordon a labourer and his mother was Mary.

He was baptised on the 13th May 1855 at St. George in the East, Stepney, Cannon Street Road (his parents were given as Joseph Gordon (labourer) and Mary. His address was given as 11 Plough Alley (and his birthday was confirmed as 17th April 1855).

On the night of 7 April 1861 Samuel was living with his father Joseph Gordon and his mother Mary Healey at 11 Plough Alley, Wapping.

The address for his birth comes from the 1871 census where a Samuel Gordon of the correct age, 15, is living as a lodger with his sister 13 year old Hanna Gordon at 25&27 Rood Lane, St Gabriel Fenchurch, London. He is a clerk, and she is a scholar, and under "Where Born" the address of "11 Gt. Hermitage St. Wapping" is given. This is presumed to be a mistake, as Plough Alley lead off Great Hermitage street.

From his granddaughter Jean: "Samuel Gordon worked as a Fishmonger at Marchmont Street. When the owner wanted to retire, he said that he wished Samuel could take over the business as he thought he was smart. However, Samuel didn't have any money to buy the business. He went to old Mr. Balfour to ask to borrow the money to buy the business. Mr. Balfour wryly suggested that he'd lend him the money if he married his niece Janet."

At the time he was living at 86 Marchmont street, London.

in 1876 the Post Office Directory lists 36 Marchmont Street (now #76) as being occupied by a fishmonger called Charles Lee. By 1877 it was listed the occupant as Samuel Gordon. So he took over the business in either 1876 or 1877 soon after he was married.

By 1881 they are living together at 84 Marchmont Street, St Pancras, London with their first three children, Mary, Helen and David. Samuel is a fishmonger, and they have both a servant girl, and a nurse. On the opposite side of the street, in number 77, is a household with James and Mary Balfour (42 and 43) which (if they are relatives) may possibly explain how he came to meet Janet. The family says that he had a fish and game shop on Marchmont street.

By 1891 they have moved to 60 Compton Street, St Pancras where they have had six more children, twins Hannah and Jane Garvie, Isabella, Alice, Eugenie and Samuel J. Gordon. At this time Samuel is still a Fishmonger, but his place of birth is given as Wapping in London (rather than St Pancras). Even with this number of children they can still afford a servant! 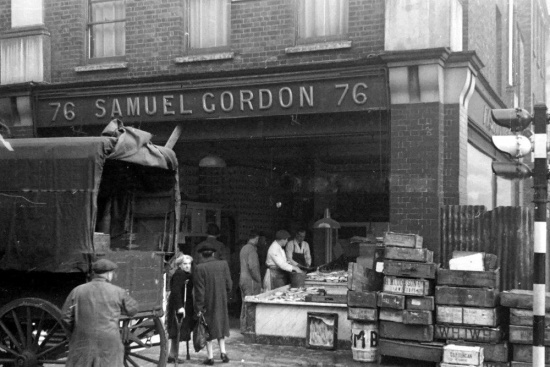 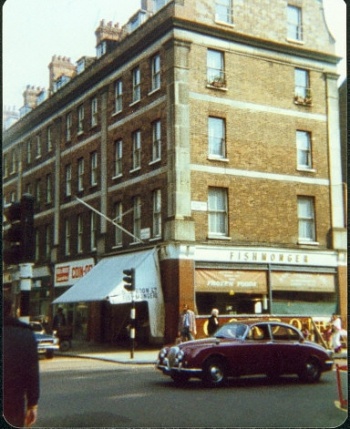 This picture taken in 1977 shows the fishmonger's shop on Marchmont street. The tiles on the wall behind the unfortunately placed Jaguar car still spell out the name "Gordon", although it is unknown if a Gordon still ran the shop at this time.

The tiles are no longer there (replaced by a window), and the shop is now the "Moreish Deli".

There is a separate page for the Marchmont St. fishmonger's shop, as given it was established in 1803 (according to the adverts) then it predates Samuel's birth!

They are still at 60 Compton Street for the 1901 census, where they have gained three more children, John, George, and Eva, although sadly we appear to have lost young Samuel, whose death (Samuel James Gordon) was registered in the September quarter of 1891 in St Pancras at the age of 2 (Pancras, 1b, 49).

Note: The numbers of the houses were renumbered at least twice. For example, 84, Marchmont Street in 1880 is now numbered 76.

Interestingly, there is a James Millar (& Sons) who was a baker at 17 Murray Street, Stirling in 1909. Stirling is where Eugenie Gordon went to work in a restaurant (potentially a couple of doors down).

Samuel and Janet were buried in the Christian portion of the Jewish Cemetery at Golders Green (Hoop Lane?).

Telephone Directory His entry in the telephone book in 1941-56 read:

By 1984 the advertisement had gone, and the entry said:

In 2001 a planning application was granted to add some signage to the basement entrance for "Bloom's Bar" The main shop has a sign entitled "1 HOUR PHOTOS".

BMD: Jean Garvie Gordon, Marriage, Jun 1908, St. Giles, Volume 1b, Page 1059 (males on that page transcribed so far are Thomas Bateman Bassham and William Chatwynd Gardiner). Images confirm that there is no Robert Watson on that page.

I am researching my family from Torryburn Fife Scotland. Some migrated to Middlesex so I am posting the surnames to see if any other researcher is about linking to these families.

James BALFOUR born 1839 Torryburn Fife and his wife Mary are also on the 1881 Census living at 77 Marchmont Street London. James was a Baker by trade, his parents were James BALFOUR and Mary RITCHIE.

One A.W. Clarke, a second Lieutenant of the Royal Flying Corps, was hospitalised at the Queen Alexandra's Military Hospital At Millbank with neurodemia and discharged from hospital on the 4th May 2017. He was 22 and had been in service for 2 years.

One A.W. Clarke, a second Lieutenant of the Royal Flying Corps "E", was hospitalised at the Queen Alexandra's Military Hospital At Millbank with a head contusion from 21st September 1917 to 17th January 1918. He was 23 and had been in service for 2 years.