Hannah Hyde (or Hide) was born on the 5th October 1837 in Thatcham, in Berkshire, England.

Hannah Hide was born on the 6th October 1837 at Thatcham, Newbury, Berkshire, England.

Her father was William Hide (labourer) and her mother was Hannah Pocock.

Her marriage register entry says that her father was William Hyde. She was christened in Thatcham a few weeks later:

In 1841 she is living in Shaw, Newbury, her father is a corn porter (although in this census she is listed as Hellen - but she has the right age, and there is no Hellen Hyde in the 1851 census).

In 1851 she is living at the White House pub in Speen, Newbury, Berkshire. Her father is the publican there, and she was 13 years old and living with her 7 brothers and sisters.

But there is also a Hannah Hyde (single) alive in 1911 who was born in 1838 in Thatcham, Berkshire. So there may be more than one born then. That might be Hannah Hide baptised 11 Jun 1837 to James Hide and Maria Hide.

Hannah Hyde (the future Hannah Francis) married George Willis in 1860, but then he died less than a year later. Here she is already a widow, living with her husband's parents in Nuffield, about 22 miles from Speen.

So by 1861 she is living 22 miles away from her family in Gangsdown Hill, Nuffield, Oxfordshire with the parents of her dead husband, John and Harriet Willis.

Thus she was a widow when she married John Francis, a blacksmith, in 1865.

On the 21st January 1865 she married John Francis, in the parish church of Nuffield. The register of her marriage says that she was a widow from Nuffield whose father was William Hyde, a corn dealer.

John's occupation is given as blacksmith, and his father is listed as William Francis (also a blacksmith).

The witnesses who signed the register were a Henry Francis and a Jane Willis.

On the night of 2 April 1871 is 32 years old, and is living with her family at Stoke Row, Oxfordshire. Her husband John Francis is still a blacksmith, and three of her children are living with her: William Francis (5), Sarah Francis (3), and Katherine A. Willis (10).

In 1881, she was 42 and living at 1 Newland Lane, Ipsden, Oxford, with her husband and children John, Sarah, William, and Edwin.

In 1901 Hannah is 62 and still living with John in Ipsden, at a place called the Grove. She is there with her husband, and her son Edwin who is 22. Her other children (William, Sarah, John) have moved to Reading where they are running a butcher's shop.

Hannah died on the 24th March 1907, and was buried at St John the Evangelist, Stoke Row, Oxfordshire. Her husband died 9 years later in 1916 and was buried in the same grave. 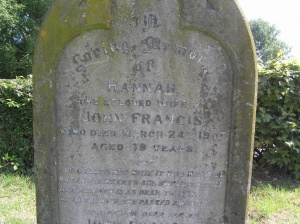