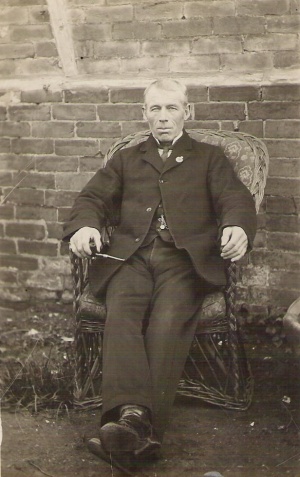 John Francis was born on the 12th April in 1839 in Nuffield, Oxfordshire. His parents were William Francis and Sarah Randall.

John Francis was born on the 12th April 1839 in Nuffield. He was baptised on the 18th May 1839. His parents were listed as William and Sarah Francis (with William being a blacksmith).

On his birth registry entry his mother is recorded as Sarah Francis, formerly Randall.

In 1841 he was living with them at Gangsdown Hill, Nuffield. Next door but one is an older John Francis (54) who could possibly be his grandfather.

In 1851 he was stll with his parents at Gangsdown Hill. His grandmother Jane (71) is also living in the house.

In 1861 John was living with his parents William Francis and Sarah at Nuffield Common. The properties either side of this one in the census were listed as Huntercombe Farm, and Gangsdown Hill.

On the 21st January 1865 he married Hannah Willis, in the parish church of Nuffield. The register of his marriage says that she was a widow from Nuffield whose father was William Hyde, a corn dealer. Her previous husband was called George Willis.

John's occupation is given as blacksmith, and his father is listed as William Francis (also a blacksmith).

The witnesses who signed the register were a Henry Francis and a Jane Willis.

In 1871 John was living with his wife Hannah, and her child from her previous marriage Katherine A. Willis, and their children William (5) and Sarah (3).

On the 4th February 1879 they had a son called Edwin Francis in Ipsden.

In 1881, he was 41 and living at 1 Newland Lane, Ipsden, Oxford, with his wife and children John, Sarah, William, and Edwin.

Like his father, John was a blacksmith, and employed 2 men.

His widowed father William lived in nearby Nuffield at the Gangsdown Hill and Grocery Shop. His father was also a blacksmith and iron founder, but employed a larger total of 7 men. Living with William was three of John's siblings.

In 1885 he is registered to vote in Stoke Row, Ipsden. by nature of having a dwelling house there.

On the night of 5 April 1891 John is living with his wife and son at the Common, Stoke Row.

In 1901 John is 61 and is still living in Ipsden, at a place called the Grove. He is there with his wife, and his son Edwin who is 22. His other children (William, Sarah, John) have moved to Reading where they are running a butcher's shop.

In 1911 John has followed his children to Reading, and is a widower living at 63 Watlington Street, the site of a butcher's (and green grocers) shop run by his children. He is listed as assisting in the business (butcher).

John died on 15th December 1916, aged 77 years. He is buried with his wife Hannah (who died 9 years earlier) in St. John the Evangelist's churchyard at Stoke Row.

The registration entry for his death was reported by his step-daughter Katherine A. Price (nee Willis). At the time John Francis was 77 years old, living at 63 Watlington Street, Reading. He was listed as formerly a Blacksmith (Master). His death certificate lists the cause of death as Cerebral Haemorrhage/Heart Disease.

The Kelly's Directory for 1871 for Nettlebed (6 miles from Watlington) lists a William Francis as the blacksmith.