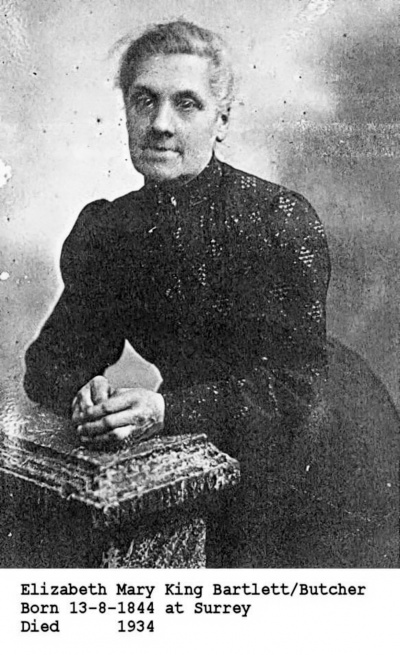 Elizabeth Mary King Bartlett was born on the 13th August 1844, and was baptized on the 11th September 1844 at St. Mark's Kennington, Surrey.

Her father was Matthew Thomas Bartlett, and her mother was Emma King Taylor.

On the night of 30 March 1851 Elizabeth Bartlett was living with her family (parents and five siblings) at 2 Clifton Place, Lambeth, Kennington, Surrey. Also with the family was a servant and a nurse maid.

On the night of 7 April 1861 Elizabeth Bartlett was 16 and living with her family at Linkfield Street, Reigate Foreign. Where "foreign" referred to the rural parts of Reigate, with Linkfield Street now being part of Redhill.

On the night of 2 April 1871 Elizabeth Bartlett was living with her parents at Alpine Villa, Reigate, Surrey.

Her father was given as Math Thoe Bartlett, and her mother as Emma Bartlett.

They had 5 (at least) children:

And at least three grandchildren

Charlotte was born in Canada:

By the night of 2 April 1911 William Butcher has died and Elizabeth is a widow living alone with her daughter Priscilla.

They have moved down the road to 105 Watlington Street. The house has five rooms (not including scullery or bathrooms).

She was listed as having been married for 37 years, and had 5 children, or which 3 were still alive.

She was buried on the 27th December 1933 at the London Road Cemetery in Reading. Her residence was 18 Fatherson Road.