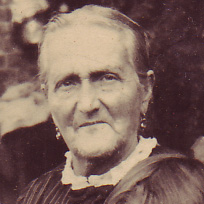 Sarah Ann Clarke was the second wife of William Chettleburgh. She was the mother of some (but not all of his children) including Phoebe Chettleburgh.

Sarah was born in Woodton (Norfolk, south east of Norwich) in around 1846 (according to the 1881,1891, 1901, and 1911 censuses), but was not baptised there. Her parents were John Clarke (an agricultural labourer) from Kirstead, and Mary A. Clarke from Hempnall, Norfolk.

On the night of 30 March 1851 she was still living with her family in Shotesham All Saints.

On the night of 7 April 1861 she was living away from her family who were still living at Shotesham All Saints.

By 1877 she was a Laundress in Ber Street, Saint John Sepulchre, Norwich.

She married William on the 10th of December, 1877 at the Registry Office in Norwich. Her marriage certificate is on the right, and a transcript is below:

Together with her husband William Chettleburgh they had 8 children, of whom 5 survived until the 1911 census.

However, there is also a record of a Sarah Ann Clarke (in Lakenham), who christened a George Clarke on the 20th April 1884 who was born on the 18th December 1873, which if the same person would predate her marriage to William.

By 1881 she was living with her husband in Lakenham, Norfolk.

The 1851 census (below) gives us the combination of birthplace and parents, the age is a year out though (could be due to the census occurring at different times of the year, and it agrees with her marriage certificate):