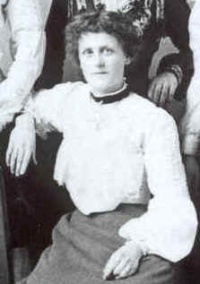 Phoebe Annie Chettleburgh was born on the 19th of December 1883 and was registered in the sub-district of Mancroft (Norwich) on the 16th of January 1884. She was baptised on the 6th April 1884 along with two of her elder siblings Ellen and Walter. 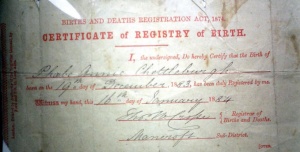 Her parents were William and Sarah Chettleburgh.

There is no "Phoebe Chettleburgh" listed for the 1891 and 1901 censes. Instead I believe that she was listed at 67 Lindley Street with her father under the name "Annie" or "Anna" (her second name). In 1901 Annie is listed as being a card-board box maker, which ties in nicely with her marriage certificate.

She was married to James Carrington, on the 9th of December 1909 at the age of 25. Her profession was listed on the marriage certificate as a box maker. Her residence at the time of the marriage was listed as "Lindley Street, Lakenham", which we assume to mean the family pub, The Cricketer's Arms, and her father was listed as William Chettleburgh, a licensed victualler.

She had three children with her husband James: Hilda, Geoff and Maud.

When James and Phoebe died, Maud was a baby and was brought up by the next door neighbours.

Phoebe died tragically of Tuberculosis aged only 31 on the 28th of November 1915, and was buried at Old Lakenham Churchyard on December 4th, 1915. At the time she was living with her husband at 47 Southwell Road, Norwich. 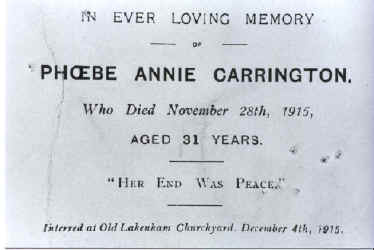