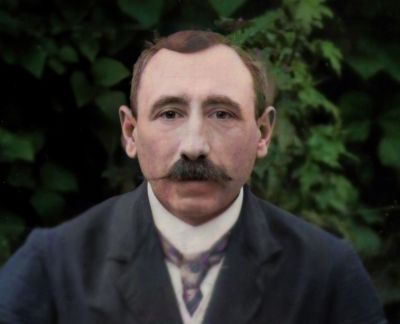 James Carrington was born in Norwich on the 2nd January 1868 (see the oddly named birth certificate below), and was christened on the 1st December 1869 at St Mark's Lakenham at the same time as his brother Frederic (born Jan 9th, 1866).

His parents were Henry Carrington and Phoebe Smith, and he was listed in the 1881 census as living with them in 2 Wellington Terrace in Norwich.

The birth certificate of James Carrington is transcribed here (Mancroft is on the West side of Norwich):

Clearly, at this point you are thinking that this must be the wrong person, since sex change operations were not really popular in 1868! However, the following notes attached to the birth certificate show that there was a mistake, but not how this was made!

Here Phoebe Carrington is his mother (who it has taken 35 years to noticed her daughter is in fact a son - presumably she couldn't read the birth certificate) and who is Eliza Bunting? I reckon that this is Eliza Carrington, James's sister.

On the 27th November 1897 he married a widow, Ellen Butterfield (nee Walmsley) in Blackburn, she was the Inn Keeper at the Ship Inn.

In 1901 he was still living with his wife Ellen Butterfield in Blackburn, where he was listed as a beer seller (working on his own account) occupying the Ship Inn at 151 Penny Street. Ellen was 12 years his senior, and was a native of Blackburn.

The Ship Inn has long since disappeared.

He was married to Phoebe Chettleburgh on the 9th December 1909, and had two children Geoff Carrington Geoff and Maud. At the time of his marriage he was listed as already being a widower, and his profession was a "painter". We do not know if this meant a picture painter or a decorator! Possibly if the former then that might be related to him being an advertising agent in 1891.

His address at this date was given as 10 Carshalton Road, Lakenham, Norwich. His marriage certificate lists Frederick and Eliza Bunting as witnesses. It is highly likely that Eliza was in fact this sister (and hence Frederick was his brother in law).

He had three children with his wife Phoebe: Hilda, Geoff and Maud.

When James and Phoebe died, Maud was a baby and was brought up by the next door neighbours.

James died two years after his wife on the 7th October 1917 at 47 Southwell Road at the age of 49. According to the death certificate (below) he was a licensed victualler, and he died of Phthisis Pulmonalis (Tuberculosis). The signature, description and residence of the informant was given as M.A.L.Spencer (sister) in attendance, 10 Carshalton road, Norwich. James had a sister called Mary Ann (born around 1876), and I assume that this is the sister referred to.

His son Geoff also contracted tuberculosis, and had to move to a sanatorium to recover.

In 1881, 151 Penny Street, Blackburn was occupied by Thomas Parsons and his family. No signs of an Ellen though. He was a beer seller and mason, although it doesn't appear to have been a pub at that time.

FreeBMD lists the registration information for his marriages:

Currently this is the only photograph we have of him (pictured holding his son Geoff and his wife Phoebe is holding Maud):